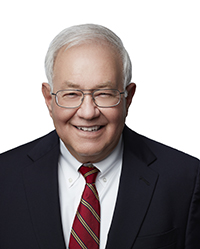 Bill’s practice, for the past 30 years, has focused on civil litigation and trials, primarily in defense of personal injury lawsuits. Bill began his career as a state court felony prosecutor which launched his profession as a trial attorney. In his 35 years of practice, Bill has tried literally dozens of cases to jury verdict, with uniformly excellent results, a consequence of his courtroom savvy, tenacity and determination.

Bill’s civil practice has focused on the defense of maritime injury and claims, products liability, premises liability, municipal and police liability, and motor vehicle accidents. Bill has also developed his practice in the defense of workers’ compensation claims. Bill is particularly passionate about work-place safety.
Bill utilizes a team of paralegals and investigators to assist in developing a defense for jury presentation.

“My approach to any piece of litigation is to investigate the facts of the case and to analyze the circumstances with an ultimate view toward obtaining victory in the courtroom. My moto is ‘whatever it takes’.”