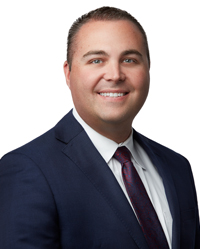 A native of Mayfield, Kentucky, Jay Matheny grew up in a blue-collar home to working-class parents who instilled traditional, hard-working values in Jay that still resonate with him today. To Jay, persistence equals success, and clients will not find a more persistent attorney than Jay.

Jay is a member of the Kentucky Bar Association, the McCracken County Bar Association, and is licensed to practice before all state courts in Kentucky, the U.S. District Court for the Western District of Kentucky, and the U.S. District Court for the Eastern District of Kentucky. Jay’s primary practice areas include creditors’ rights, landlord/tenant relations, workers’ compensation defense, and general civil litigation.

Jay’s hobbies including hunting, fishing, and vacationing with his family. Jay is also involved in several community organizations and serves on several community boards, including the Barkley Regional Airport Authority Board of Directors and the McCracken County Ducks Unlimited Sponsorship Committee. Jay is also a member of Sharon Baptist Church of Mayfield, Kentucky, a Life Fellow of the Kentucky Bar Foundation, and a frequent presenter of the Credit Abuse Resistance Education (C.A.R.E.) program to high school seniors throughout western Kentucky.

Jay resides in Mayfield, Kentucky with his wife (Amanda), their son (Grayson), their goldendoodles, Clark and Douglas and their tortoise, Oscar.